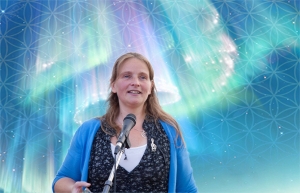 Marret Vonhoff studied musicology at the University of Amsterdam, with a specialization of World and Historical Music. She also attended lessons in African Percussion and Cora at the Music Conservatory in Amsterdam and also in West Africa.

Her musical and creative talents we re already visible at a very young age. She plays a multitude of instruments and says that each instrument resonates with an inherent part of her Soul. (African Percussion; Cora; Ballophone; Piano; Vocals; Cross Flute; Saxophone; Cello; ; Recorder; Saxonette).

She attended lessens in drama/musical. In this field she sees an opportunity to come in contact with the different aspects of the Self.
Together with her mother, Wil Vonhoff, she wrote several musicals for ‘children’ with themes always in connection with the energies of that moment and therefore with pure and universal insights.

Since 1992 she travels all corners of the Earth preferably to get in touch with as many indigenous and pure people as possible. In India, Mali, Ghana. Burkina Faso,

South-Africa, Mexico, Australia, England, Scotland, Greece and Egypt, Israel…. she came in contact with their ancient musical traditions. ln her lectures, trainings, lessons and workshops she passes on this purity, because it touches the essence of life.

Her first book about the deciphering of an ancient Music Inscription, located in the heart of South-India, was released on 23rd of April 2013 and on the 23rd of April 2015  the English version. This inscription contains very specific frequencies that can bring about resonance and transformation deep within the human DNA. It also contains unique musical proportions that Marret has also found in all other ancient, indigenous cultures, in their music, rituals, medicine, architecture, city maps etc. They are based on a society and lifestyle fully in harmony with the cosmos. As above, so below.

Since the release of her books she has also started giving lectures, trainings, workshops and soundinitiations about its content.

ln june 1998 she started with her own Musical Institute in Bussum (the Netherlands) and in the fall of 2012 she has founded a Sound Laboratory and Holistic Center in ‘het Gooi’: the ‘Garden of Amsterdam’.

These two Institutes offer her the possibility to work on her ideals, among which the development of New Education methods for regular and music education.

Through Conscious Learning: Holistic and Holographic Cosmic Education from 100% Consciousness.

In this form of education music is the Starting point and forms the Base of (inter-dimensional) Resonance.

“I would teach children music, physics, and philosophy; but most importantly music, for the patterns in music and all the arts are the keys to learning.” ~Plato

”To develop a complete mind: Study the science of art; Study the art of science. Learn how to see. Realize that everything connects to everything else.” ~Leonardo da Vinci.

“Music is a more potent instrument than any other for Education, because rhythm and harmony find their way into the inward places of our Souls”~Plato

To this end she has already made contact with people from different countries. She likes to share her ideas about this new ferm of Education with anybody who is interested. E.g. she presented a music workshop for the Inspection department of Education in the Netherlands and at another time for the Union of Education (CNVO). She also started as a member of the European Alliance for Childhood in Brussels (Belgium) 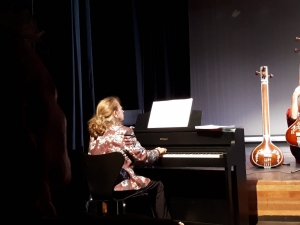 Wil Vonhoff – van Veen has received and used many chances to develop herself in a versatile way.

Besides her education as a Montessori teacher for group 8 (finallevel) in primary education, her musical forming was woven through her life as a golden thread since the age of 5. (Piano; Vocals; Flute; African Percussion).

Furthermore, as a music teacher for many decades, she also stimulates many hundreds of students with her creative way of teaching and making music.

She attended classes in harmonies, counterpoint solfège and conducting school choirs. She is a composer and writes musicals.

Together with her daughter she organizes and helps to conduct African djembé and vocals workshops.

In the field of drama, pantomime, movement expression, folk dancing and choreography she also has received the necessary training.

Her interest and absorbing herself in “ancient” and modem history and religion including in the field of music, brought her to many corners of the world.

Together with her daughter she passionately passes on her knowledge and insights to the younger generation.

As mother and daughter Will and Marret form a real team. They feel and complement each other flawlessly. 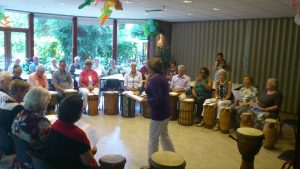